This is about Day 3 of the 2019 Modern Warfare Week in Fayetteville and Autryville, NC. See other recaps of the rest of the event on our blog.

It’s Thursday of an extremely busy week, so it feels wrong to say that it’s Day 1 on the Modern Warfare Symposium and Expo… but it’s true! With the Demo Days, SOF for Life Seminar, and Welcome Networking Reception complete, it’s finally time for the Expo Hall and Symposium Sessions to commence.

This is about Day 3 of the 2019 Modern Warfare Week in Fayetteville and Autryville, NC. See other recaps of the rest of the event on our blog.

It’s Thursday of an extremely busy week, so it feels wrong to say that it’s Day 1 on the Modern Warfare Symposium and Expo… but it’s true! With the Demo Days, SOF for Life Seminar, and Welcome Networking Reception complete, it’s finally time for the Expo Hall and Symposium Sessions to commence.

The Modern Warfare Symposium is Co-Sponsored by the U.S. Army Special Operations Command (USASOC) and the Global SOF Foundation. We’re so honored to have USASOC on board and providing their support for this event.

That support showed from the get go, when LTG Fran Beaudette, the Commanding General of USASOC, provided the opening remarks. “Warfare is always evolving. We must remain one step ahead of it,” he said.

LTG Beaudette talked about the importance of events that “connect American innovators with our Warriors,” and that through these efforts, we keep getting better!

He then introduced the next speaker, GEN John M. Murray, the Commanding General of the U.S. Army Futures Command, where LTG Beaudette said they focus on bringing ideas from “concept to combat.” 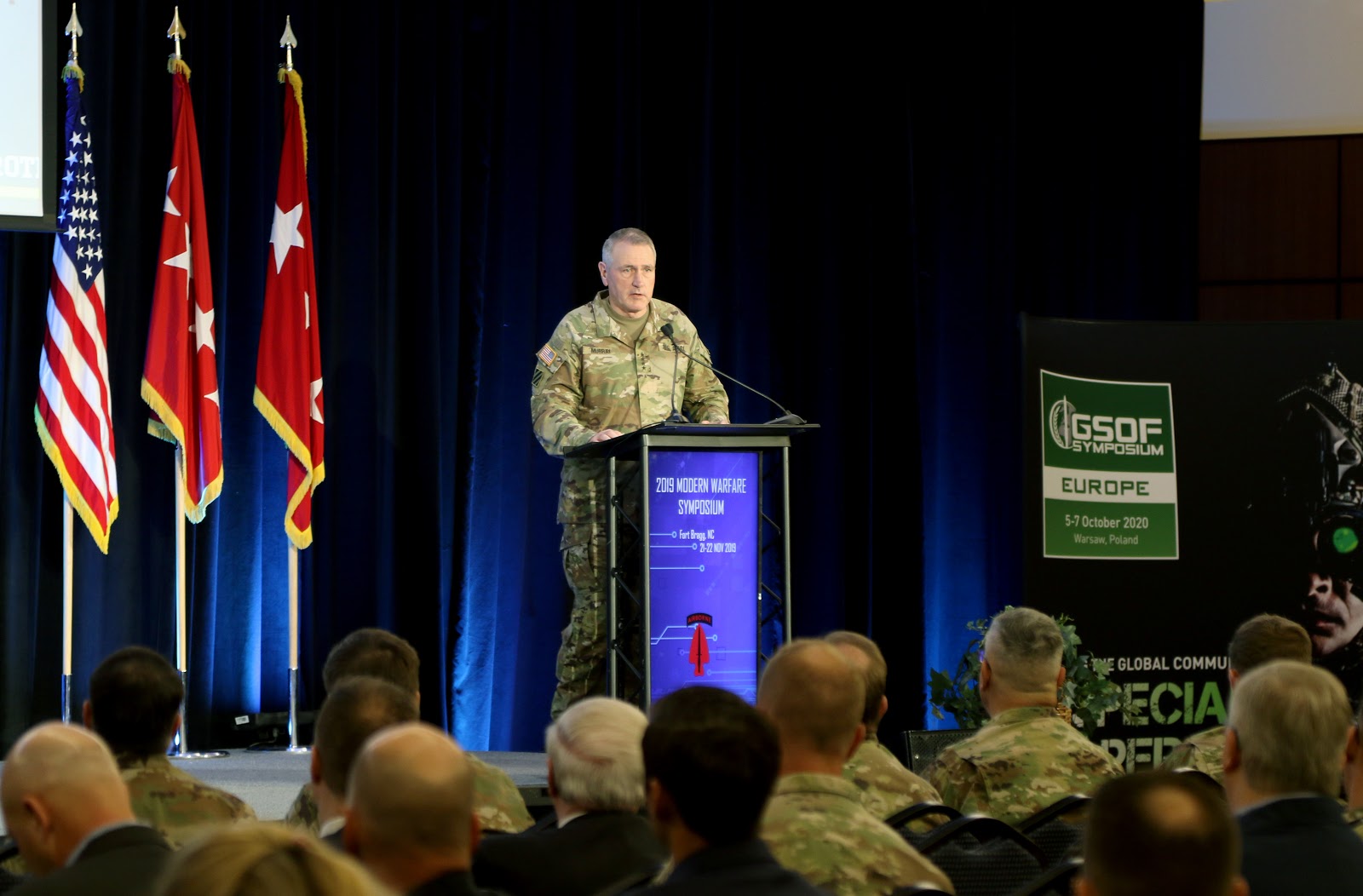 Murray spoke about his young Command, and that at just 15-months old it’s already clear that it’s not “traditional”.

Rounding out the morning was a panel on Information Warfare. It featured BG Rick Angle, Deputy Commanding General of JSOC, LTC Fabio Cantini from the 28th Operational Communications Regiment “PAVIA” in Italy, and LTC Eugenijus Lastauskas from the Lithuanian Armed Forces. 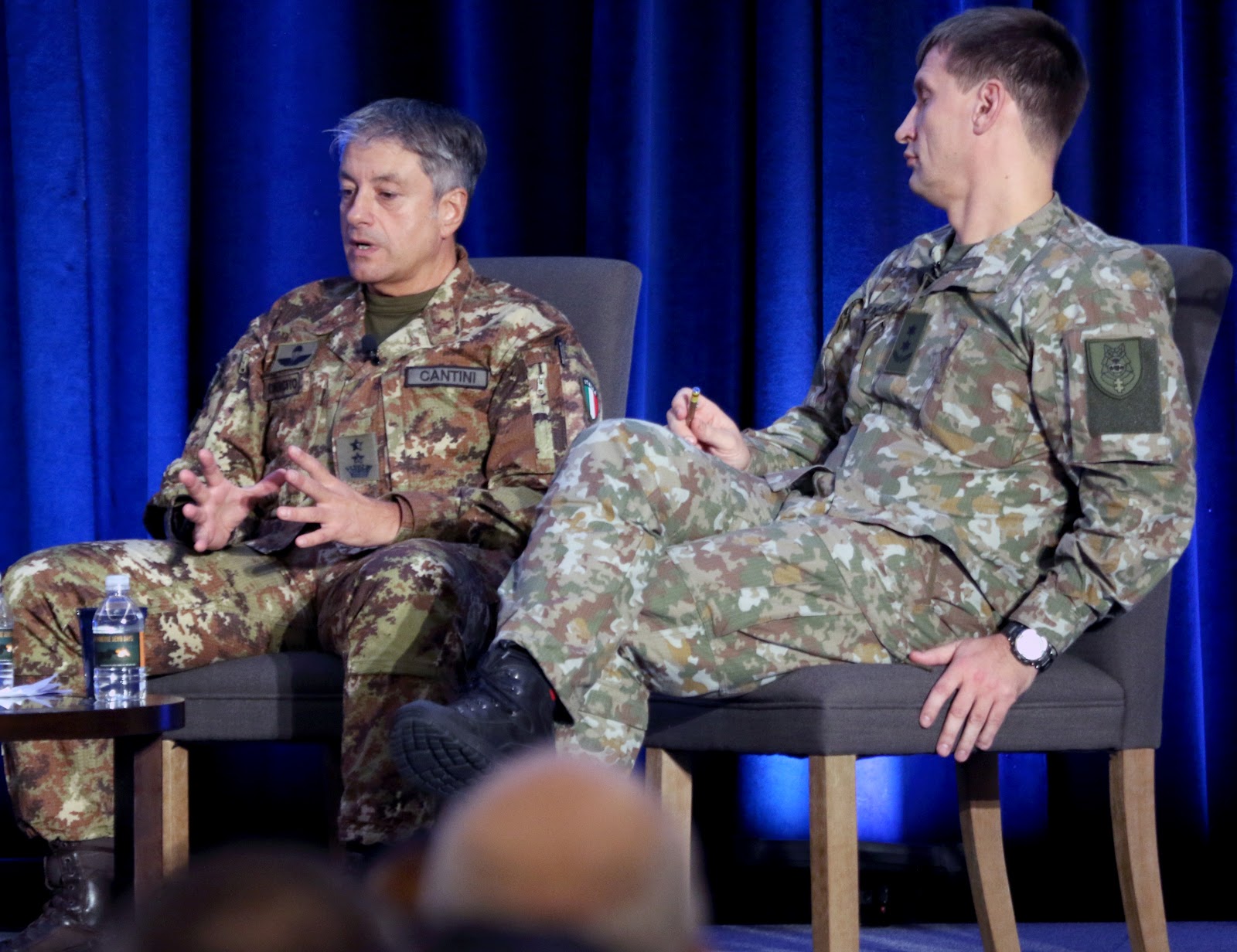 Moderated by Dr. Kalev Sepp of the Naval PostGraduate School, it was a great conversation. As one attendee said, “It’s a topic that should be discussed more. There was an interesting debate about where the U.S. should focus its resources: information warfare or kinetic actions.”

The ending theme was that the U.S. is playing “catch-up,” and that waiting and reacting is not the answer.

The Modern Warfare Expo is an exhibit hall opportunity that takes place right next to the Symposium, so while the General Sessions were going on, select industry organizations were showcasing their capabilities in the adjacent room. 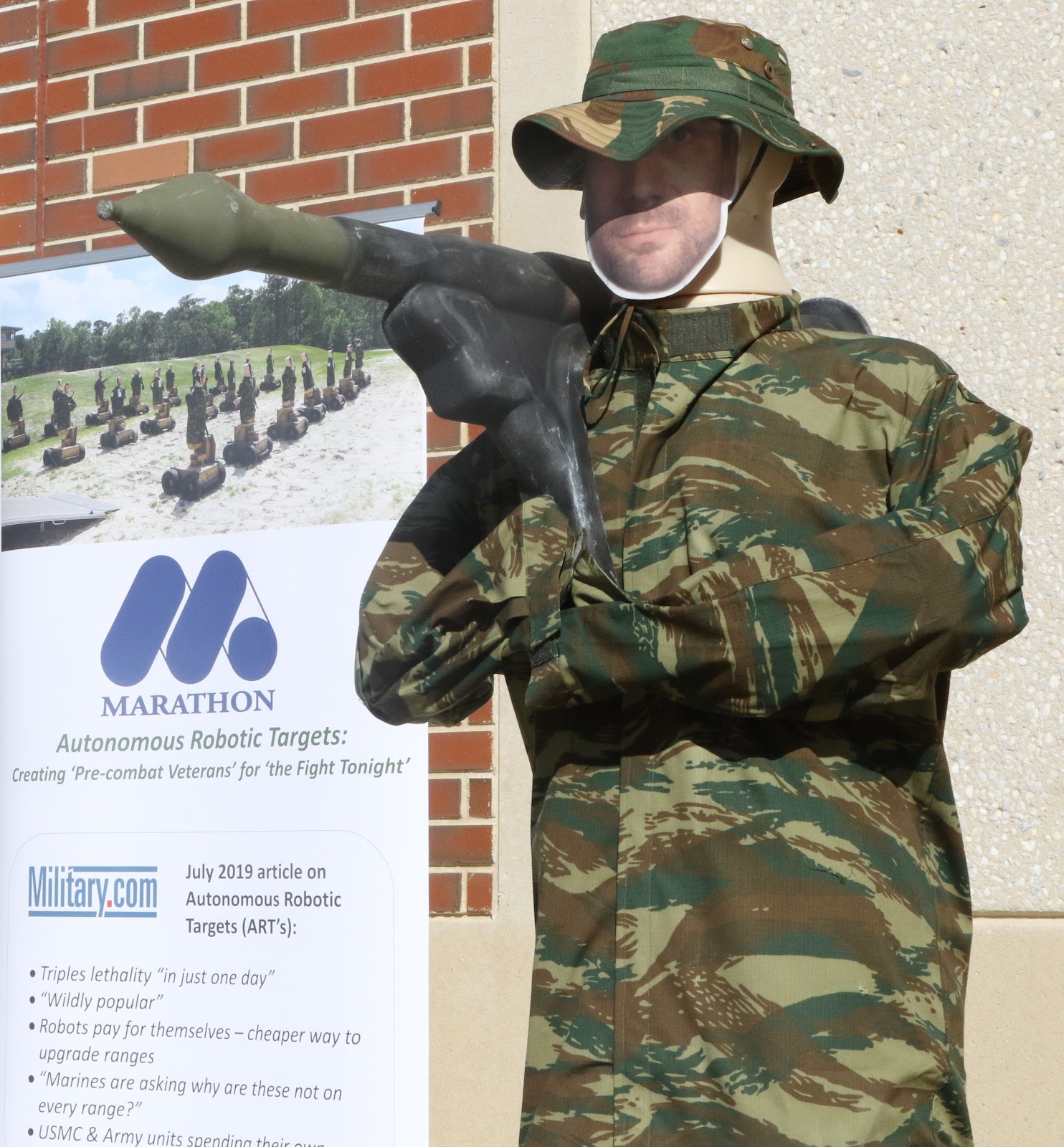 Marathon Targets showcases their robotic targets at the Expo (they were also at Demo Days).

The Expo is also where all of the food, coffee, and refreshments could be found, courtesy of many great sponsor organizations like Huntington Ingalls Industries (Platinum & more!), DSG Technology and Owl Cyber Defense (both Gold), and Barbaricum (All Day Coffee). And people were there for it!

One representative from Huntington Ingalls came by registration and said she had trouble parking because she’d never seen the venue this busy!

From outdoor equipment presented by Brokk to technologies that were demonstrated at the Demo Days, like ATN Corp., to event newcomers like our partner, Deployed Resources… there was plenty to check out. 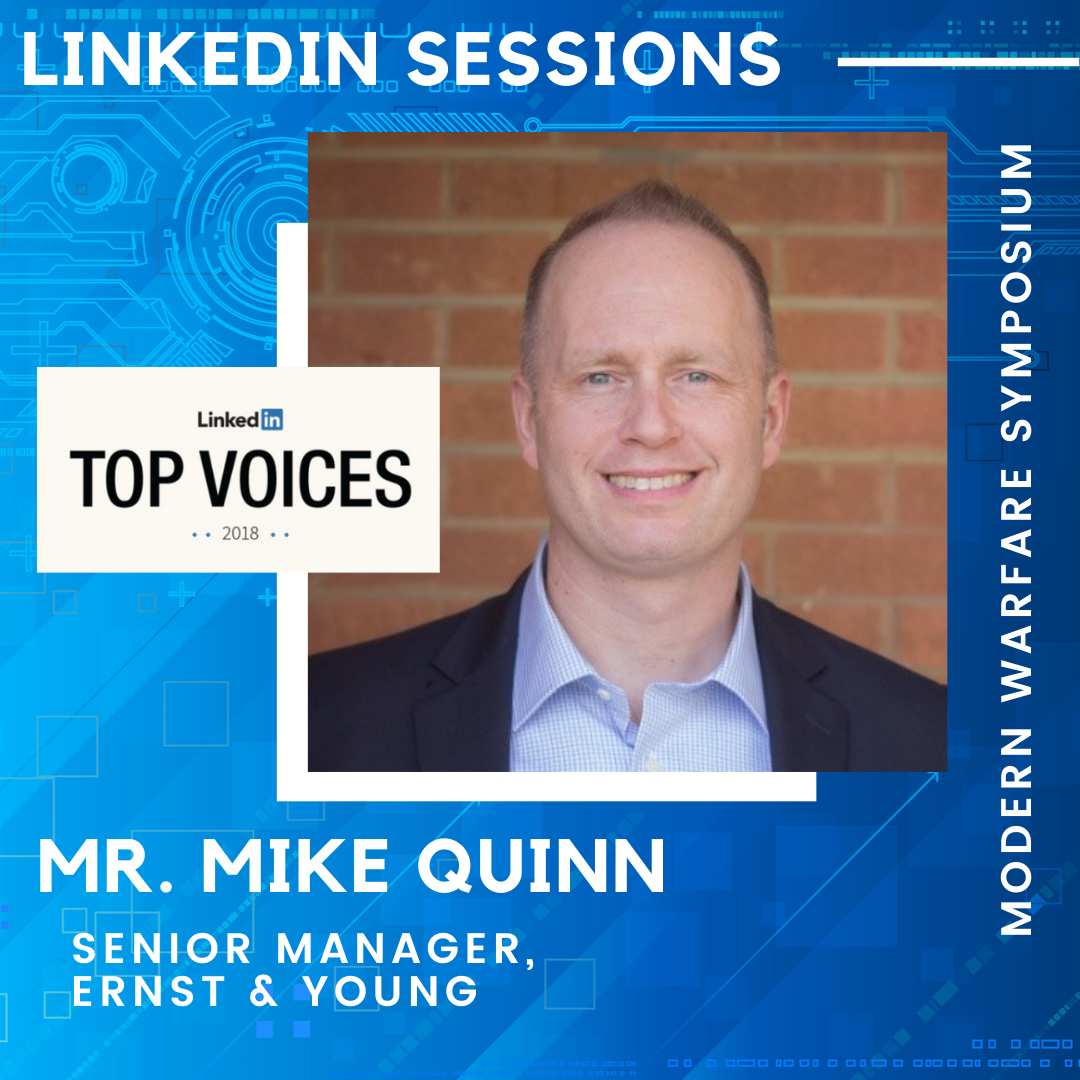 We also had an awesome opportunity provided by Ernst & Young Government & Public Sector: free one-on-one LinkedIn page reviews for Active Duty military. Mike Quinn, one of the “Top Voices of LinkedIn” in 2018, ran those sessions and said he had at least 25 people take advantage of the opportunity.

Back in the Symposium, the informative sessions were on a roll. As frequent GSF-flyers know, we have short sessions called “SOF Slams.” These always run about 30 minutes, and they’re an opportunity for a speaker to deep dive into a SOF-relevant topic.

Today’s first slam was called, “Gaining Combat Advantage from the Wave of Cyber Commoditization,” and it was presented by MAJ Joseph “Jay” Kosturko from the U.S. Army Cyber Institute.

He was followed by Mr. Marcus Hays, the CEO and Co-Founder of ORBIS Wheels, Inc. His presentation on “Why Reinvent the Wheel?” talked about the cool advancements happening with one of mankind’s oldest inventions. Seems like there IS always room for improvement! 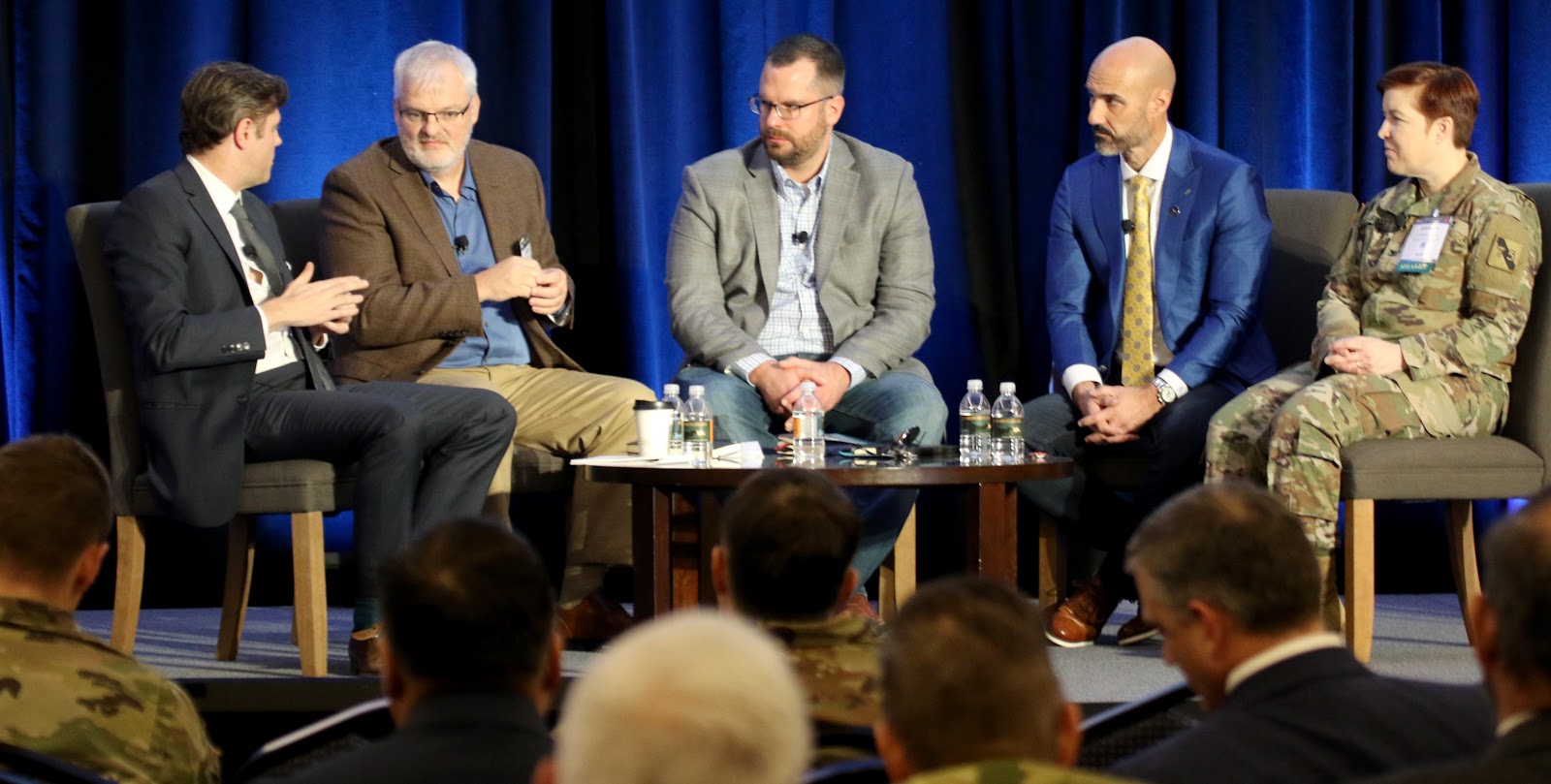 The Disruptive Technologies Panel in action!

The final panel of the day focused on disruptive technologies and was moderated by Mr. Patrick Tucker, the Technology Editor at Defense One. Mr. Tucker led a lively discussion between Mr. Robert Ferriol, President of AEVEX Aerospace, Mr. Charlie Greenbacker, VP at In-Q-Tel, Dr. Warren Grice, VP at Quibitekk, and COL Elizabeth Sweet from the Defense Innovation Unit (DIU).

The final speaker of “Day 1” was Dr. David Kilcullen, President and Chief Executive Officer, Cordillera Applications Group. Dr. Kilcullen has spoken at a GSF event in the past, and he’s so good that we brought him back as a Keynote!

He spoke about “liminal warfare,” a layer of conflict that falls in between layers between clandestine and overt action. If you want to learn more, check out this article from Dr. Kilcullen on the subject.

As one attendee told us, “I love the way you schedule long and frequent networking breaks.” And we do that for a reason! We’re here to learn, but also to learn about one another and strengthen our bonds.

In addition to frequent breaks for meals and coffee, we always host a networking reception in the Exhibit Hall. This evening’s was kindly sponsored by Global SOF Foundation Small Business Partner, Axiologic Solutions! 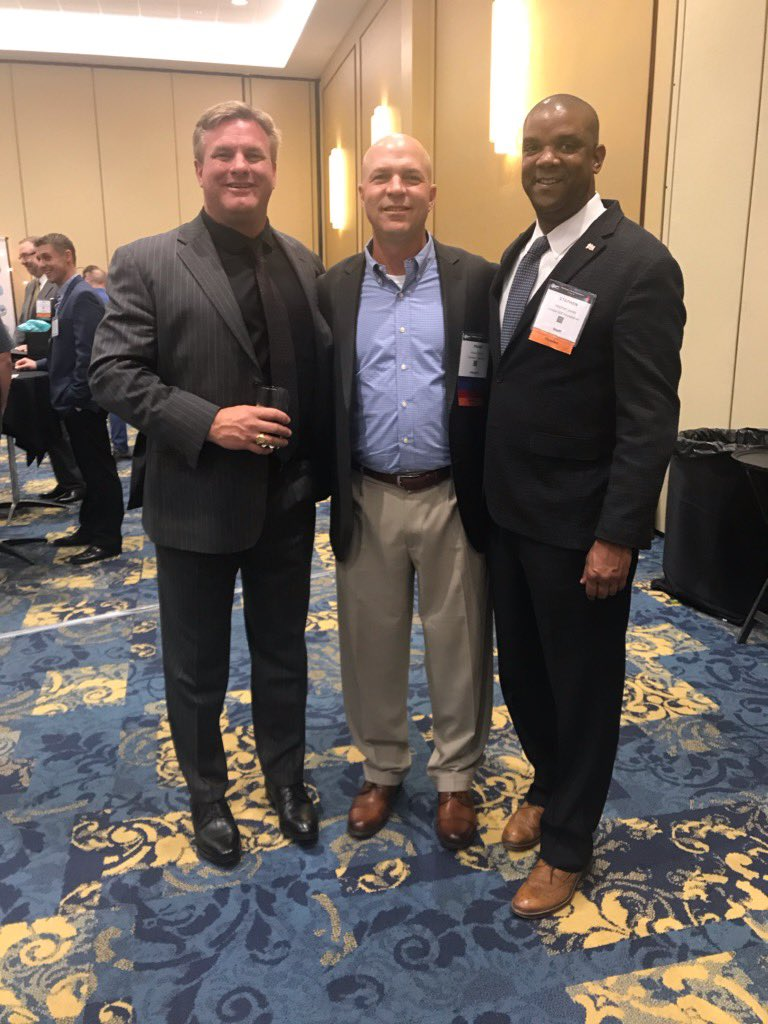 With good music, plenty of appetizers, and a Beer Garden (courtesy of System High Corp!), it was a perfect opportunity to reminisce with old friends and meet new ones!

The team at Ernst & Young also took the opportunity to do some LinkedIn Live Streaming, which was a first for us at a GSF event. We’re going to work on doing more of these, and hopefully we’ll start getting pretty good at them!

There’s just ONE more (half) day left of Modern Warfare Week, so tune back in to see how it all ends!