This is about Day 2 of the 2019 Modern Warfare Week in Fayetteville and Autryville, NC. See other recaps of the rest of the event on our blog.

Today was a big time transition day, in multiple ways. This is the first time that we’ve ever done an event that really had a day like this… a sort of moving day in between two main events.

This is about Day 2 of the 2019 Modern Warfare Week in Fayetteville and Autryville, NC. See other recaps of the rest of the event on our blog.

Today was a big time transition day, in multiple ways. This is the first time that we’ve ever done an event that really had a day like this… a sort of moving day in between two main events.

Demo Days were still happening at The Range Complex, but only for a half day. Add that to the setup and prep at the Iron Mike Conference Center, getting ready for the Expo and Symposium. Plus we had an awesome Welcome Reception. And oh by the way… a literal transition seminar.

So onward into what we did on 20 NOV…. Transition Day!

We’ve talked many times on the blog about the importance of preparation for transition from Active Duty. No matter how prepared someone is, there’s still so much to do and think about. It’s an extremely overwhelming process.

We’re very fortunate to have an amazing Partner that’s focusing on supporting Special Operators through that process: The Honor Foundation. They run a life-changing 12-week transition course in strategic locations in the US, and they’ve even launched an online program for those not co-located with a course venue. 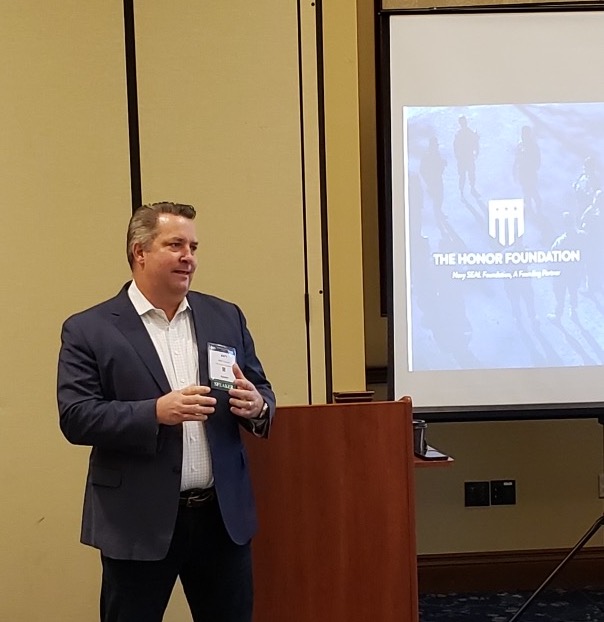 To give Active Duty an idea of what the course entails, and to put them in the transition frame of mind, we often hold one-day seminars at Global SOF events. The Honor Foundation shows up to put them on, and we get great feedback from those who attend.

Wednesday’s seminar brought in over 30 members of the Ft. Bragg SOF community to spend the day with The Honor Foundation. We were extra lucky because THF’s Founder, Joe Musselman, even made the trip from the West Coast to lead the session. He was joined by THF’s CEO Matt Stevens and VP of Operations, Will Dewilde.

The Sun Came Out!

We had one last morning at The Range Complex [Read About Day 1 Here] for the Demo Days event, and in a change from the previous day: it was sunny!

Another 25-30 new folks showed up, clearly motivated by the good turn in the weather. They had the chance to enjoy demos from companies with cutting-edge scopes, robotic targets, precision explosives, and more.

A highlight of the day was the record setting demonstration put on by DSG Technologies. It was a world-record shot attempt through 12 ballistic gel blocks (and one balloon), demonstrating the capabilities of their supercavitating swimmer round and their subsonic armor piercing rounds. And it was successful! 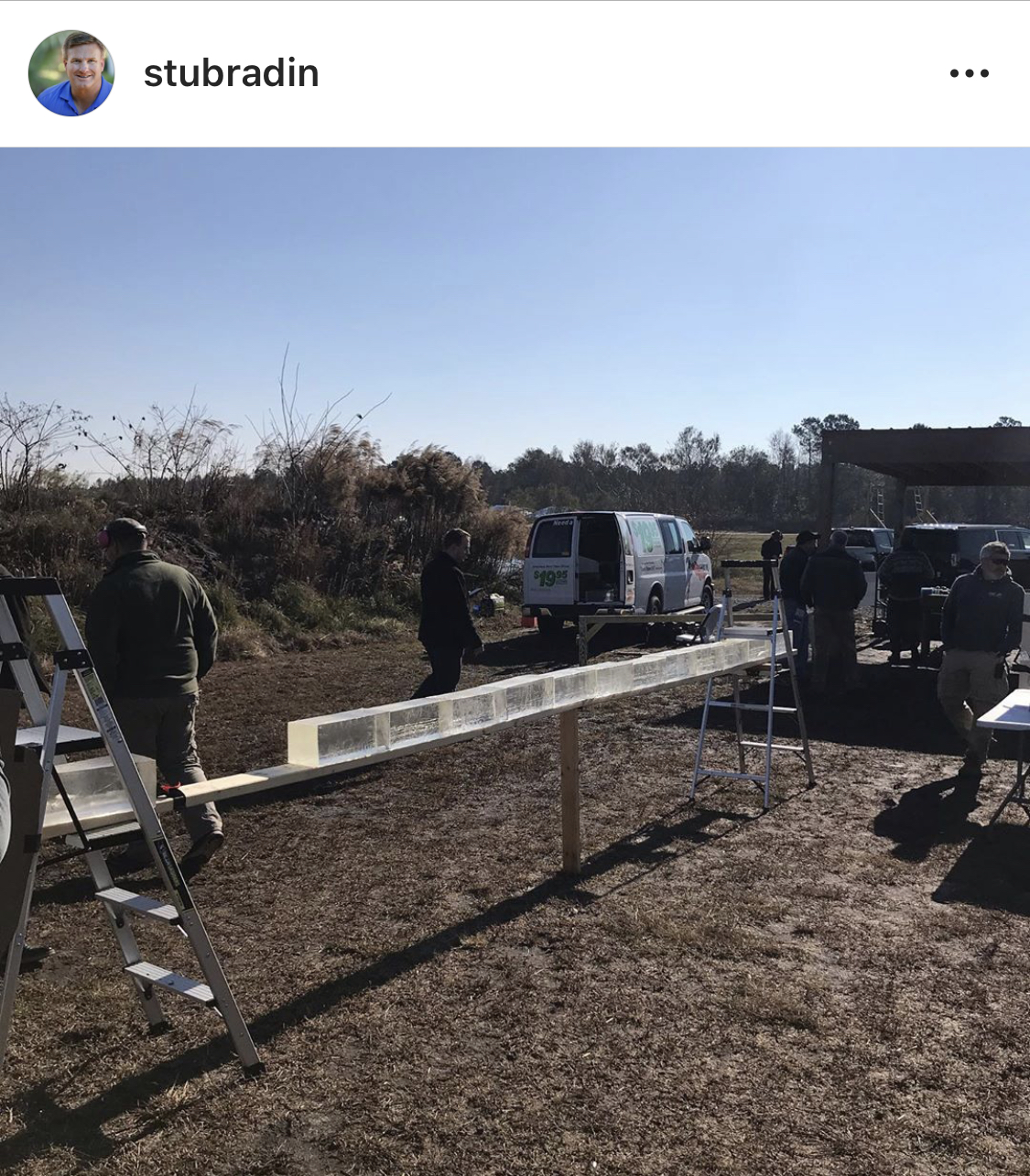 Defense One journalist Patrick Tucker was in attendance, and he’s written a great piece on it. Check it out here.

What a note to end our inaugural Demo Days on!
—

The Return to Iron Mike

The inaugural Symposium in 2018 all took place at the Iron Mike Conference Center on Ft. Bragg, so while half of the Global SOF team were running things at the range, the other half made the early morning return to IMCC.

It’s always easier to do something for the second time, so for the most part things went smoothly. We used our Lessons Learned from the previous year and brought in our own “Pop Up” WiFi networks to keep our attendees connected, made the Expo Hall a little bigger, and had registration set up with plenty of time to spare. #yay

Exhibitors and vendors started to show up to bring in their capabilities, which is when things really started coming to life! 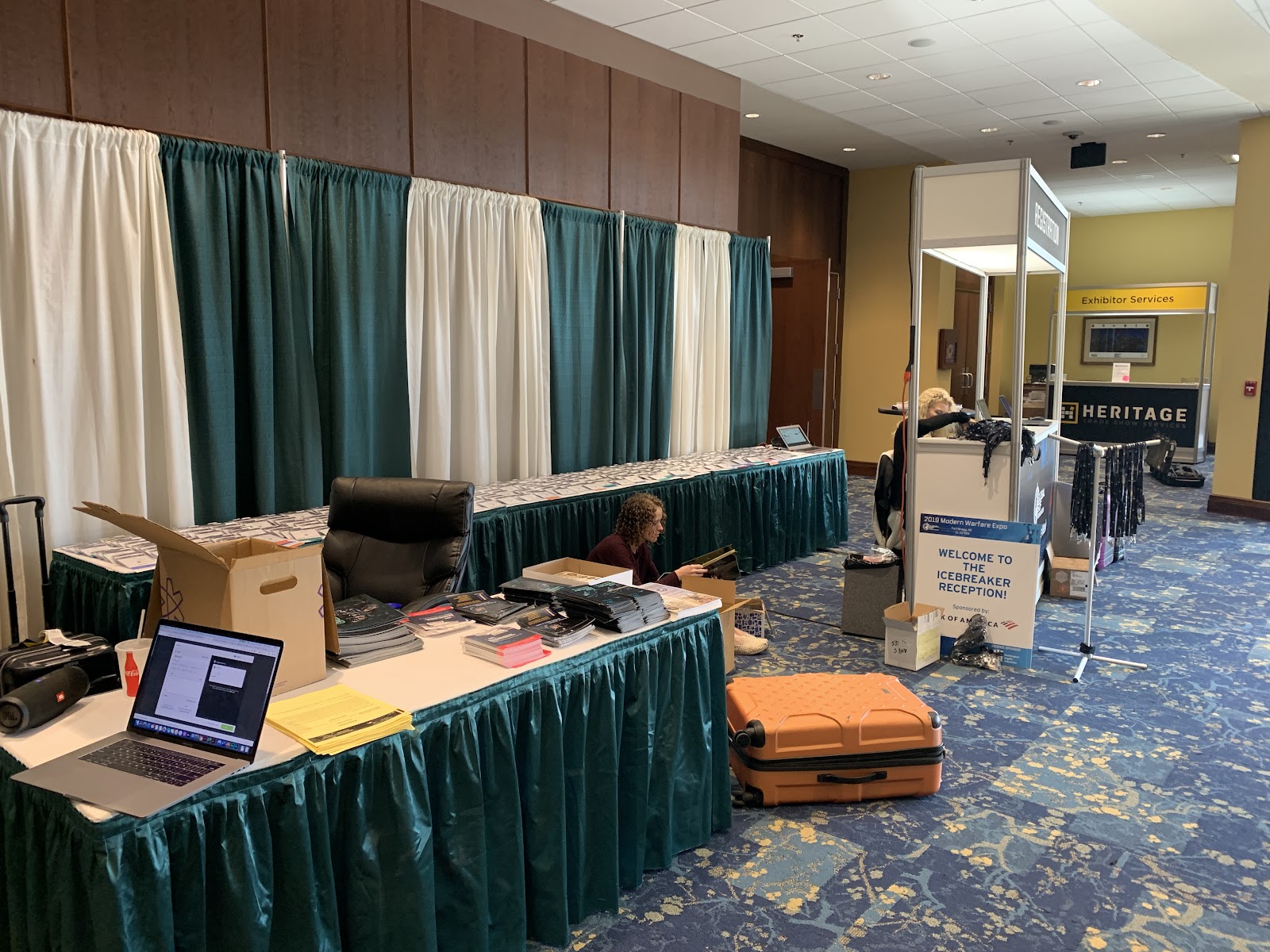 Behind the Scenes of Setup.

It looks like organized chaos, and perhaps it is a little bit… but we were able to leave in just enough time to make it to the last half of the Welcome Reception.

The Welcome a.k.a. The Reunion

Wednesday night was sort of the “Venn Diagram Intersection” of Modern Warfare Week. Demo Days people, the Seminar Attendees, and the Symposium / Expo folks were generally here in Fayetteville, so it seemed like the right time to have our opening soiree.

Luckily, our friends at Bank of America jumped on the opportunity to sponsor the event, so we booked The Taphouse in downtown Fayetteville, ordered some food and drinks, and invited all of the event attendees to come by!

There were easily 150 people there–ranging from our “frequent flyers” who see one another often to total newbies to people who have been in the community forever. There were a lot of introductions, but even more comments like, “oh man, how long has it been??”

We even had the added surprise of a musical duo who were so good that no one believed them when we learned that they had only met the week prior. They were awesome, and we told them that we’re definitely booking them for this event again next year!

Thanks so much to Bank of America and everyone who made “Transition Day” a success!

Stay tuned to the agenda for what’s going on tomorrow, and we’ll see you at Iron Mike Conference Center!